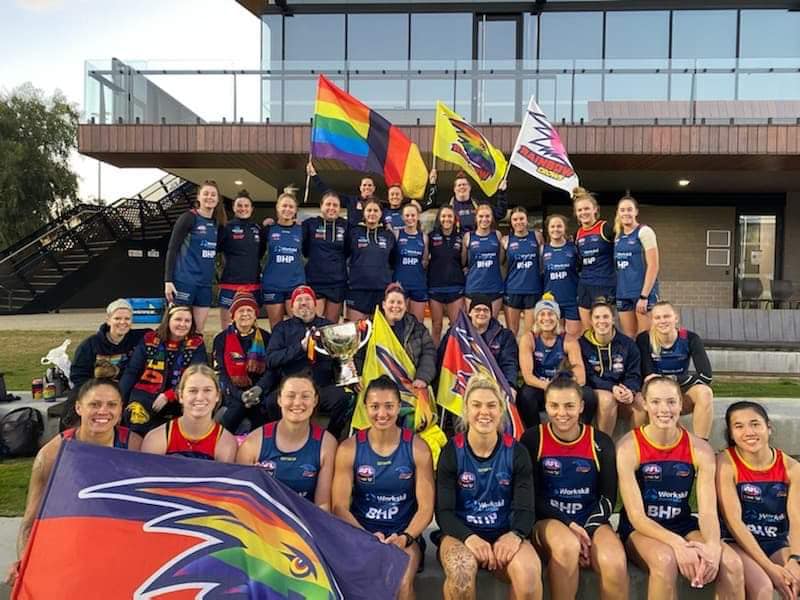 Hi everyone it’s me again Angela with another exciting update on what some of our committee and members got to experience on 04/07/2022 after our amazing President had a word with our favourite club. We got to go to watch our premiership winning champions training and we got to have a photo with the team and yes the cup which is hopefully only our first for the year. I don’t know about you but I have a sneaky feeling we might get a second one this year.

Brett had a chance to speak to the team and other club officials about why the Rainbow Crows mean so much to so many of us. After the chat and a photo there was work to do the players had to train and we had to eat pizza lots of pizza from Australia’s Pizza House and let me tell you the pizza was delicious thanks to Brendan for picking them up.

It was a real privilege to be able to watch the training and wow do they train hard I was exhausted by the time they finished. We saw them training in groups, skills training, goal kicking and yes they were going between the two big sticks, forget about them having to run uphill omg I just about needed a defibrillator watching that oh the burn. We saw EJ working off to the side with the Physio as she is still working on her foot from the season just gone she said she’s almost good to go. She did give the Physio a bit of stick about his poor kicking he too ended up eating pizza.

What an atmosphere they really are one big family the music was pumping while they trained and we found out that Niamh Kelly literally got off the plane from Ireland and came to training and we later found out the team had gone to the airport to meet her.

After all the photos with the cup were done we had to make sure the Great Wall of Sarah Allen got it back because she has been travelling around with the cup to schools giving talks so trying to hide it up my jumper was never going to work.

While it was cold out there and when I say cold I mean freezing the opportunity to watch how they train and the opportunity to chat to the team gave an insight into the dedication and teamwork showed us why they are the champions they are.

Keep an eye on our socials and if you can come to some of our events and bring your friends we have so much fun after all we all support the best club in the AFLW/AFL.

Till next time Go You Crows