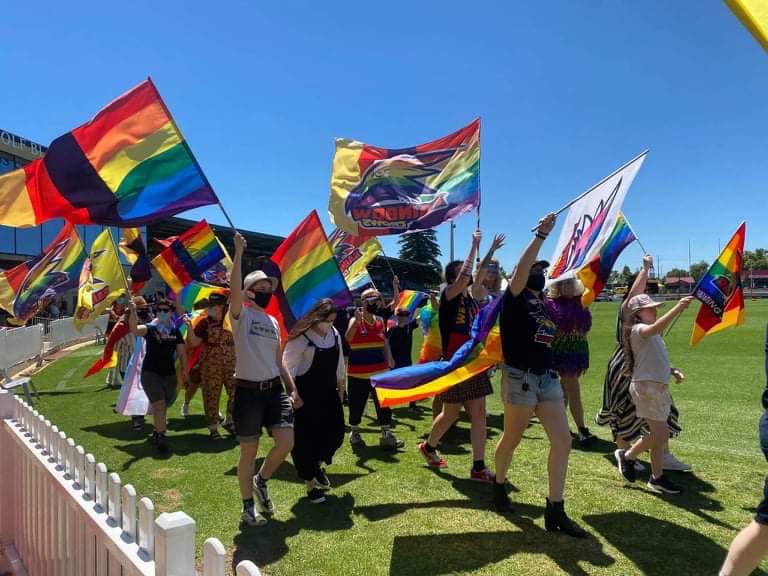 Another sporting organisation has released a pride jersey/guernsey only to receive feedback from 7 players unwilling to wear the jersey for reasons of faith. People of faith and also no faith openly support this citing their faith would conflict with wearing a pride top, but they should be the first people in line to receive their tops, there is still misunderstanding what wearing this jersey represents and why it is so important, especially from people of faith.

There are two reasons for sporting clubs and leagues to hold a pride game and wear a pride jersey or guernsey (depending on the league):

First, it allows LGBTIQA+ players, staff and fans to show pride in being their authentic selves within the sporting environment. This allows them to acknowledge the contributions made by LGBTIQA+ people in the sporting community and creates visibility for positive role models, relationships and stories that enhance the mental health of queer people.

The second reason is for clubs and sporting organisations to create conversations around the importance of diversity and inclusion of LGBTIQA+ people in sport and stand up against homophobia/transphobia and gender discrimination and violence.

LGBTIQA+ people have not felt safe or included to participate in the sporting environment as their authentic selves and many still don’t feel comfortable in doing so. People often voice that it doesn’t matter who people love or what they do outside of sport and shouldn’t be brought into the sporting realm. We hope one day people won’t have to announce their sexuality or gender. The reason it is still necessary is that LGBTIQA+ people do not have the same privileges as their straight counterparts take for granted every day without receiving repercussions or concern for their physical or mental health. In men’s sport in particular, they don’t feel they are able to hold hands or show affection with a partner in public, post pictures or videos of them with their partner on social media or take their partner to official events. Imagine how difficult and concerning it would be for an elite sports person who is not out to date someone with the fear of someone ‘outing’ them publicly, or having to ask someone to date or be in a relationship in secret. Sadly there still are repercussions for being authentic, highlighted recently after Josh Covallo coming out as gay in elite soccer, receiving verbal abuse at a game and online including threats of physical violence simply for voicing who he is. It is also very evident in the extremely low number of male players being able to be their authentic selves.

Sadly, LGBTIQA+ people still hear homophobic comments yelled out at sporting games. People are reporting that this is still accepted as it is not called out publicly and when it has been by LGBTIQA+ people, they can be targeted and abused. To make things worse, their have been multiple incidents including this season where the abuse has been reported to both security or police who have taken no action to address the situation.

It is essential for both queer and straight players, staff and supporters to share and listen to the experiences and challenges of LGBTIQA+ in the sporting environment and that EVERYONE stands up and against the prejudice and discrimination that they still face.

People using their faith as a reason to not get involved, on board or wear a pride  guernsey/jersey are standing against this very important message of promting diversity and inclusion in sport. This continues the journey of discrimination and prejudice that perpetuates the poorer mental health outcomes of LGBTIQA+ people.  Many LGBTIQA+ people have experienced significant long term mental health damage through faith based discrimination including violence and disassociation from family and friends.

Another hipocracy is that the same jersey has a big gambling logo across it. The game will be played on a field with alcohol advertising, players of faith have tattoos and these are not being highlighted as reasons for people of faith to not get involved. This alone demonstrates that the action is not justified by people of faith, discrimination based on relgious belief is still discrimination, by picking and choosing what parts of faith they support, highlights their prejudices.

What was mismanaged by the Sea Eagles in this process of holding a pride game was the essential part of providing education and training including the sharing of people’s experiences to the playing group, staff and fans. This is essential so that everyone understands the action is about diversity and inclusion and standing up against descrimination. If this is highlighted, there are no excuses why everyone including people of faith should not get on board.

It is time that EVERYONE recognises the positive and significant contribution LGBTIQA+ people have made and continue to make in sport and the wider community. It is time EVERYONE celebrates the positive impact that a pride game or round recognises, it is that diversity of people, and inclusion of EVERYONE is making the world a better place.

There are many people of faith (and people of no faith) who love, support and welcome LGBTIQA+ people and this is the message we should ALL be spreading. All backgrounds of faith have one main focus at the core of its teachings, that is LOVE, the LOVE of God, Allah, Buddha or other higher spirit, the LOVE of self, the LOVE of others, LOVE thy neighbour. It is essential that people of faith demonstrate by action what they preach and that is to show love to all. People of faith and pride in sport really is a ‘match made in heaven’.