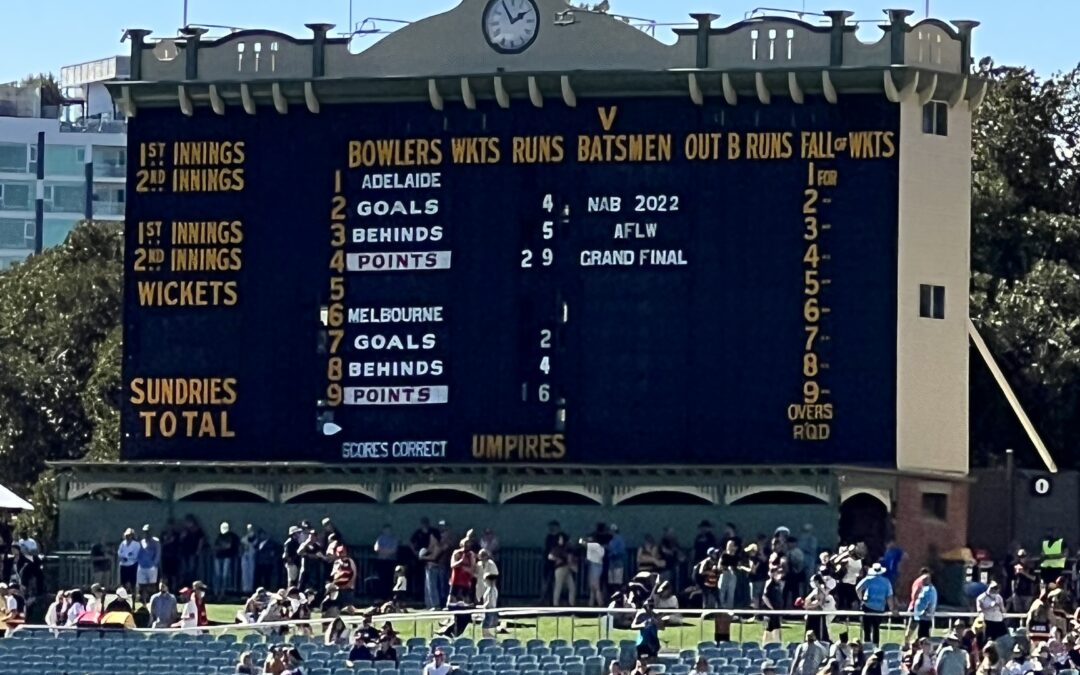 After 10 gruelling rounds, and a delayed Preliminary Final, the AFLW was down to just two teams, ready to battle it out in the 2022 AFLW Grand Final.

Adelaide came into the Grand Final as not just the dominant side of the season, but AFLW powerhouse.  This was their fourth AFLW Grand Final, and while they won their first two, they were hungry for more after losing to the Brisbane Lions in last year’s Grand Final.

In the other camp were Melbourne.  While they have had a successful AFLW history, they always seemed to be on the wrong side of luck when it came to big matches.  In 2019, the controversial conference system saw them miss out on a finals berth (while inferior teams such as Carlton and Geelong progressed).  Their 2020 campaign was cruelled by COVID, while 2021 saw them finally make finals, only to lose to Adelaide in the Preliminary Final.

Both sides had magnificent 2022 seasons.  Both sides had 9-1 records – Melbourne’s only loss being against Adelaide in round 4, while Adelaide’s only loss was a 1 point nail biter against the Western Bulldogs.  Both sides went into the finals in red hot form – Adelaide thumped St Kilda in the final round, while Melbourne became the first side in AFLW history to kick over 100 points, against fellow finalist Fremantle at Optus Stadium.

Adelaide’s superior percentage saw them finish top, and they defeated Fremantle in a hard fought Preliminary Final at Adelaide Oval.  Melbourne saw off a spirited Brisbane Lions outfit in the first AFLW match ever at the MCG in the other Preliminary Final.

So it was an epic 1 v 2 AFLW Grand Final – one where it was truly a case of the best 2 AFLW sides of the season facing off for the Premiership.  It was Adelaide that started off strongly, with most of the play being in their half of the ground early on.  In fact, at times, it seemed that the only time Melbourne got possession was from a free kick.  It was, however, an off the ball free kick against Melbourne that saw Adelaide line up for the first shot at goal.  Danielle Ponter’s shot sailed wide, but Jasmyn Hewett would mark it on the line and kick truly – first blood to the Crows.

The second quarter continued at the hot pace the first quarter had, and when Erin Phillips kicked her first of the game, and her 50th of her career, the Crows had a 2 goal lead – with Melbourne yet to trouble the scorers.  As the quarter wore on, Melbourne gained more of the ascendency, but couldn’t put it on the scoreboard.  They looked set to go into halftime goalless, until a defensive error from the Crows gifted Melbourne their first goal of the match.

The third quarter started perfectly for the Crows, with Danielle Potter marking in the goal square in the opening minute to extend the lead back out to 2 goals.  From there Melbourne started to really assert themselves on the game, but some outstanding defence from Adelaide limited the damage to a goal, and Adelaide entered the final change leading by 9 points.

Melbourne went all out to start the last quarter, but could only muster a couple of behind.  Then up stepped Danielle Ponter once again, who took a strong mark inside 50 before playing on and snapping a brilliant goal from the scoreboard pocket to seal the game – and the Premiership – for the Crows.