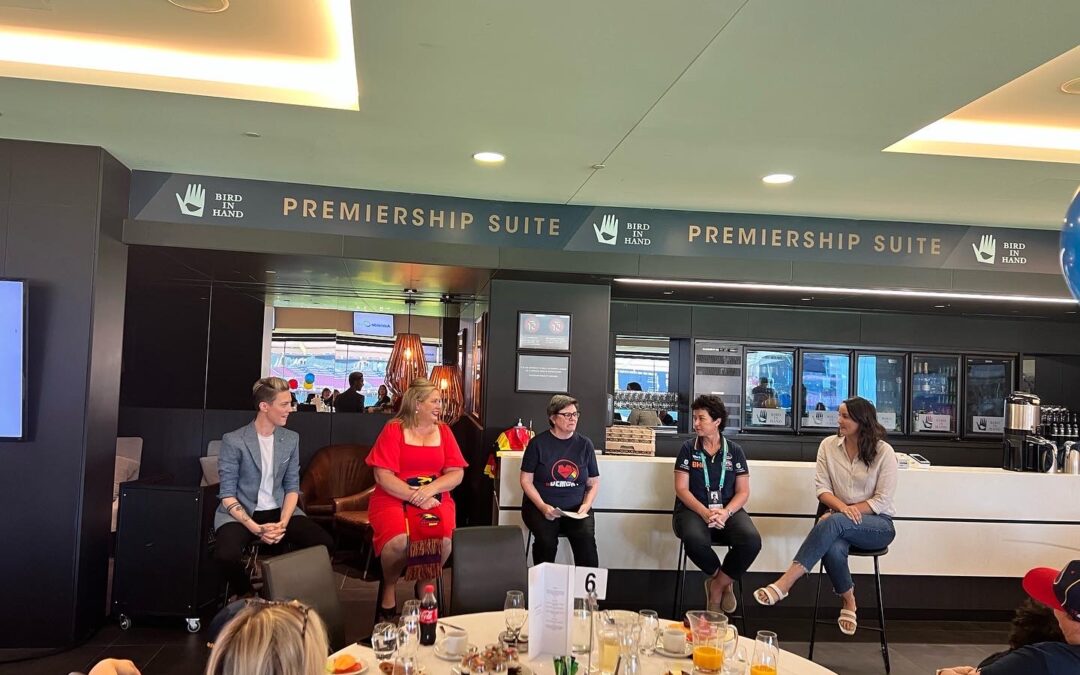 Rainbow Crows held the only AFLW Grand Final Breakfast held open to the public, inviting both Adelaide and Melbourne fans to join together.  Situated in Adelaide Oval’s Premiership Suite with amazing views of the oval, we were able to see the oval being prepared for the game. A big hot and also continental breakfast was follow by a really interesting and inspiring panel discussion. The panel of guests included:

–  The Honourable Katrine Hildyard MP – Ministerfor Child Protection; Minister for Women and the Prevention of Domestic and Family Violence; Minister for Recreation, Sport and Racing.

– Linda Fellows: joined the board of the Adelaide Crows in 2015 and was appointed deputy chair (first female in the role) in 2021. Linda chairs the Professional Standards and Integrity Committee for the club. In her day job she is Assistant Commissioner with SA Police having been appointed to that rank in 2014. Linda joined SAPol in 1987 and was awarded the Australian Police Medal in 2014.

The panel discussion was run by Katie Purvis, JOY 94.9 Presenter and Life member plus co-convener of the Ruby Demons.

The panel talked about the progression of Women in sport and business plus queer representation in sport. Many attendees found the discussion very interesting learning many and interesting facts, some included:

-Becchara was paid more as an AFLW player in 6 months (which we know isn’t high) than the total of the previous 4 years being a volleyball Olympian.

– The Adelaide Football Club Board made the decision to apply for an AFLW license in the room that we held the breakfast in and we heard about some of that process and how the AFL were quite concerned the Adelaide/NT franchise would struggle competitively. .

– Brihony talked about two AFLW players coming out as non-binary and the varying experiences working in the sports media with both traditional Male blokes and some amazingly inspiring Women.

-Katrine talked about how Government and business can take steps to increase the participation of Women in sporting clubs and organisations and positions of power.

We also discussed the importance of visibility and representation of the queer community in both Women’s and Men’s Sports.

Overall our attendees absolutely loved the breakfast and said it was the perfect way to start Grand Final Day.