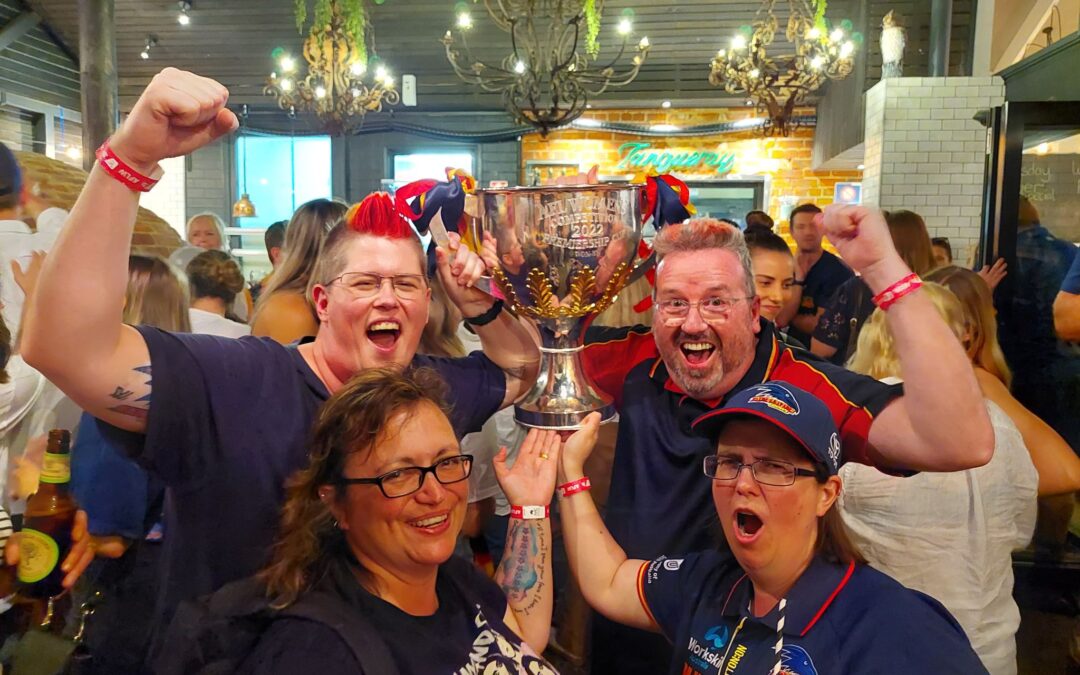 After the Crows AFLW team pulled off their third history making Grand Final win in front of their home crowd at Adelaide Oval, a few of us were lucky enough to be able to celebrate with them at the Queens Head in North Adelaide.

After starting the day with a beautiful breakfast and an engaging panel discussion around women in sport at Adelaide Oval, then cheering the team on to victory from the front row with our Rainbow Crows family there was only one way I wanted to finish off the day.

Thanks to a sneaky tip off from one of the players, we knew where they were headed to but not sure if we were going to be allowed in due to Covid restrictions etc. We decide to try our luck anyway. Once Brett, myself and Jay and Claire who had made the trip over from Victoria arrived at the Queens Head I spotted a familiar Crows staffer and decided to see if we could talk our way in. As it turns out he knew exactly who we were and said that due to all the work we do and support we give to the club that he would let us in, we certainly felt honoured and thankful for his comments.

After grabbing our first round of drinks, Chelsea Randall came straight up to us to say hi and give us hugs all around. It was amazing to be able to celebrate with her and MJ and just have a genuine conversation with them both and to hear them express how thankful they are for all the support that the team gets from the Rainbow Crows and our members.

It was great to see all of the support staff/trainers and families there to join in the celebrations. We were able to catch up with Justine Mules’s Mum, Dad and Fiancé Olivia, who all joined us on Pride March float way back in 2017.

When we managed to get ourselves out to the beer garden where most of the players were “toasting” their success, we ran into the club’s Public Relations officer – Fiona Crowe. She rushed up to us and wanted to know if we had had our photo with the cup yet? She then set off to grab if from a couple of the players. We can safely say that we were ecstatic to be able to hold up and have our photo taken with the 2022 AFLW Premiership Cup!

The atmosphere was electric and contagious as we received high fives, hugs & gratitude and thanks for our support from players, staff, trainers and coaches throughout the night.

The highlight of the night for me was when having a chat to one of the players, to be told that they are more comfortable and confident and open about who they are as a gay person in part because of what the Rainbow Crows have done over the years. That we are visible, proactive and active in the community has made them feel safer about who they are in the sporting world.

We stayed a little while longer and having photos and chats with Hatchy, Ange Foley and AFC Board member Linda Fellows before heading home to leave the players to celebrate well into the early hours of the morning.

After a very long and tiring day to remember, we finished it off by going back to a friends house and watching the GF all over again!

Can’t wait till we do it all again in August!