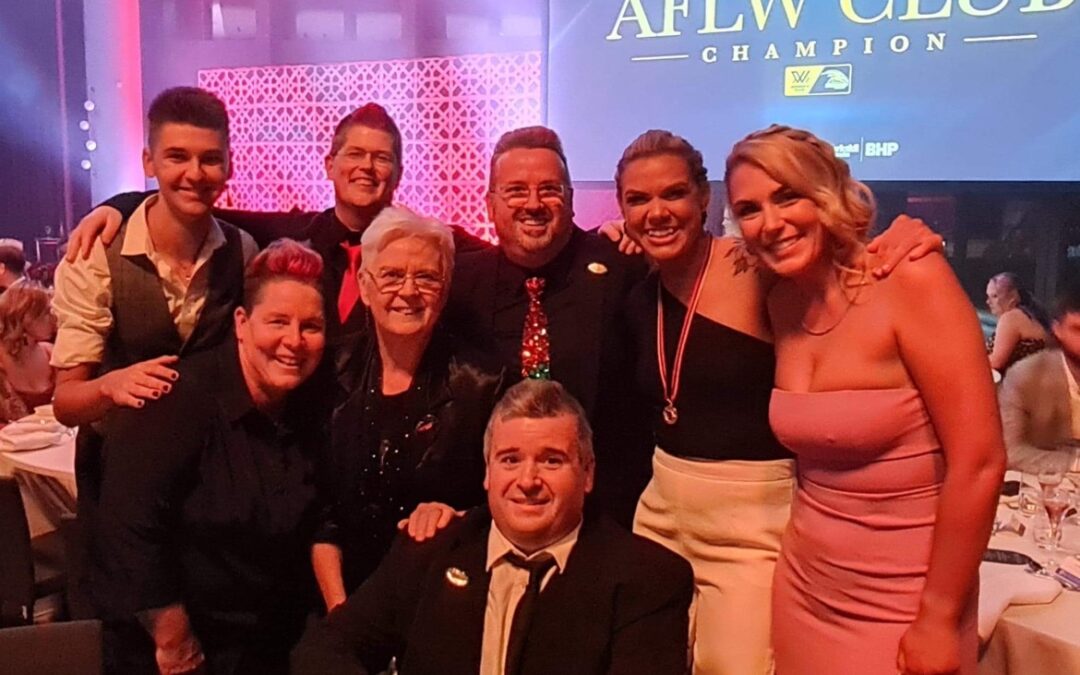 The AFLW season has come to an end and as we wait for the news around the trade period and the news of when the new season will begin, I thought I would share my experience of having the privilege of attending the Adelaide Crows Club Champion Awards night.

The Rainbow Crows committee were invited to attend, held in the Ballroom at Sky City, we all got dressed up in our best outfits, with our President definitely having the most stunning tie and Mat our Diversity Officer was absolutely stunning and made me extremely jealous I wished I would look that good.

As we entered we were given drinks, had a few chats and a photo opportunity before going in to our table along with the President and Treasurer of the Crows Supporter Group. We had a lovely 3 course meal and drinks.

However enough about that stuff I know you are wanting to know how it all went down. We were all greeted with a warm welcome to country from Jack Buckskin. The MC on the night was Jessica Adamson who was amazing and we were all very pleased to hear that when addressing the crowd they used inclusive language after the club had been given feedback from a previous event and it is pleasing to know that this is now written in to Adelaide Football Club policy.

Moving forward there were many speakers on the night including Chairman of the Board the Honourable John Olsen but the man that captivated the audience was of course Matthew Clarke who spoke about the club culture and went off on a story about a bike and a frog yep a bike and a frog! The story went a bit like this….

You have a bike you ride around and you love this bike, but then you have to take the bike apart and ship it off to the other side of the country and put it back together and it rides the same so its still the bike you love……

This was our favourite coach’s way of telling our team if they leave, they will never be in a team like this again. It was clear on the night that the culture of the Women’s team is extraordinary, and it is definitely what has them as a cohesive team. Matthew also shared a special story and a video of what happened in the rooms after the grand final win, they put the cup in the middle of the room the players gathered around in a circle around the cup then the coaching staff and other staff that keep the team running gathered in a circle around the girls and then finally all the friends and family of our team made up a third circle and they all sang the club song. It was electric I had goosebumps and a few tears to see everyone who is important to our team singing so loud and together.

Throughout the night the count was continuing through the rounds, and it was neck and neck between Hatchy, Noffy, Sarah Allen and Erin and in the late stages there was a run-on votes for Danielle Ponter and as you all know the amazing Anne Hatchard took away the honours for club champion. It was also really good to see those players who don’t usually get a mention also polling well such as the smallest player on the team the ever-reliable Rachelle Martin (I may have been fan- girling at point).

Leading goal kicker went to Ashleigh Woodland of course her award was presented by Tex Walker, Rory Sloane presented the players player awards, and this was a tie between Sarah Allen and Anne Hatchard. There was an interruption to the night with Stevie-Lee and Eloise Jones getting up to present the game ball to Danielle Ponter the finals specialist (not that they had the ball there).

Unfortunately, our amazing captain Chelsea had covid and was in isolation in a caravan however she was there via facetime, and she followed in tradition of writing a poem for the team and it was lovely to hear how she spoke about the team again showing how strong the team are through everything.

After the formalities were over it was time for everyone to let their hair down, the Gin Bar opened and the music started with the team dancing the night away. We also had the opportunity to speak with Hatchy who on the night said she would be mad to leave the team, we also had a brief chat with Erin who wasn’t giving anything away however I did point out if she stayed with the Crows she could win two premierships in a year which has never been done before.

It was clear that the Rainbow Crows mean a lot to the women’s team as we were mentioned a few times throughout the night (I’m pretty sure Matthew Clarke mentioned our hair) lol. So remember when the new season starts come out show your colours and support the most amazing AFLW team in the country.